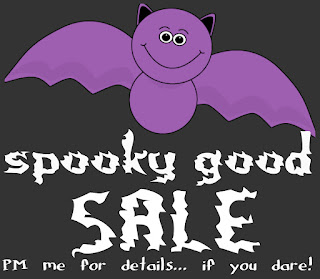 Scare up a good deal on Jamberry Nails, today only!  E-mail me or PM on Facebook for the details!
(hint: FREE shipping for everyone!  And, it gets better than that!)

Why?
Today is the last day of October (OK, so you already knew that!) and Jamberry is running a special for the consultants.  Any sales over 1000 PCV (that's $1540 retail) get double points towards a FREE trip to Las Vegas with the Jamberry Sisters! 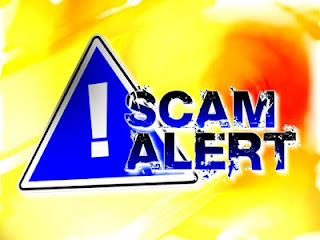 Before deciding if Solavei (or any opportunity) is a scam or scheme,
ask yourself…

Is there a product?
Yes, $49 cell phone service!

Is there Real Value being given in exchange for money?
Yes, $49 unlimited talk, text, data cell phone service with NO contract, no credit check and no hassles.

Are other reps in the company seeing results and creating an income for themselves?
Yes, myself! (and thousands of others!)

If you can answer these questions with a definite ‘Yes,’ chances are, you’re NOT going to get scammed.
Great! I knew I was on to something :) 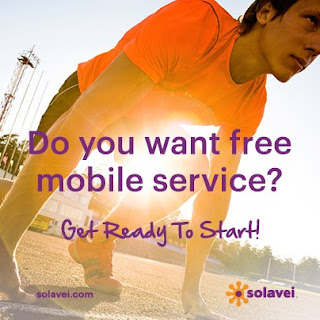 Did you know:
You can *just* save money with Solavei?  You don't *have* to share/sell anything.
If you do share with friends, you get money back every month?
If you share with 9 people, your service is free, every month?
You can ask me questions and I won't consider you a "prospect to be sold to"?
(I've got a hubby, 4 kids and 2 home businesses - I don't have time to chase people LOL!  I focus my energy on those who want to succeed and need help to get there.  And on having cute nails, of course!)
Shared by Noel Giger at 12:59 PM 1 comment: 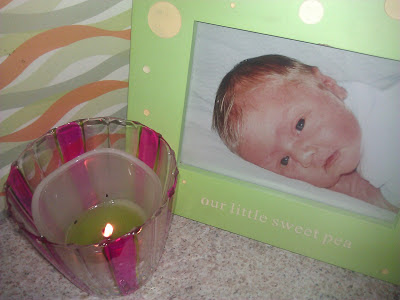 Today, October 15th, is a day set aside to remember babies gone too soon.
To honor mothers, fathers, grandparents, aunts, uncles, cousins, brothers and sisters that have said the ultimate goodbye to someone very dear.
To proclaim to the world that though their time was short, their impact is immeasurable.
To spread awareness.
To say the name...
Ian Wesley Giger

Shared by Noel Giger at 7:33 PM No comments:

Sweet Pea - the theme for his nursery and our nickname for him.
(this image available at bambinoboutique.com) 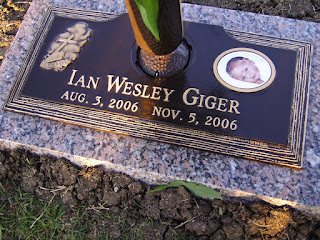 Is he the next Mark Zuckerberg?

"There is nothing more powerful than an idea whose time has come." ~ Victor Hugo 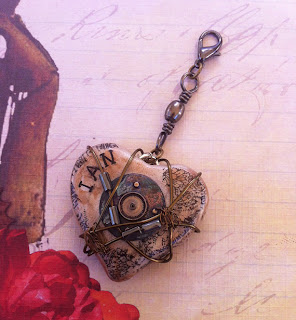 From Wendy Layne
Shared by Noel Giger at 5:22 PM No comments:

Capture Your Grief Day 7: What to Say 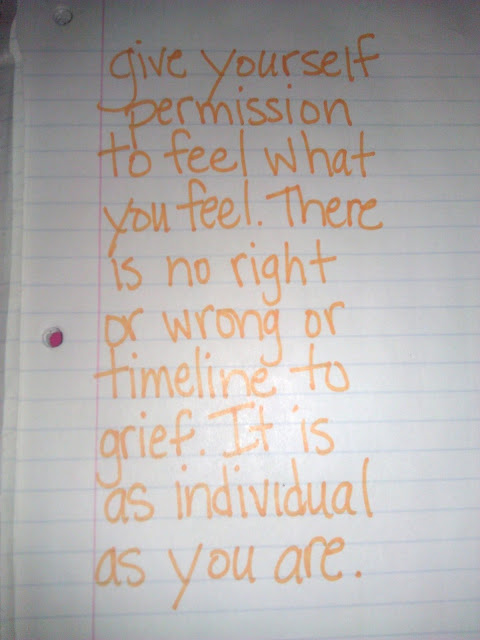 "Give yourself permission to feel what you feel.  There is no right or wrong or timeline to grief.  It is as individual as you are."

(a compilation of several sentiments that I grasped onto and have repeated often.)
Shared by Noel Giger at 5:27 PM No comments:

Tutorial: Get a "Shop" tab on your Facebook page

First, you have to have a business page - this won't work on personal pages.

Capture Your Grief Day 6: What Not To Say 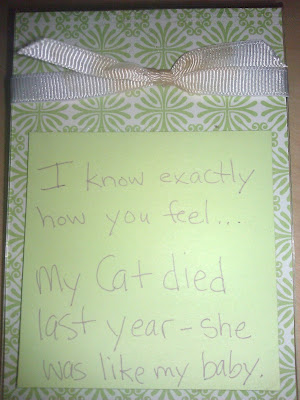 I can't tell you how many times people have tried to empathize by comparing my loss to their loss of a pet.
PETS ARE NOT PEOPLE.
I don't care how much you "love" your cat/dog/parakeet/hamster/horse, it is not the same as carrying a child for 9 months, holding them in your arms almost every minute for 3 months and then watching them die.  Dealing with bereaved siblings who wonder "am I still a big sister", blaming yourself, questioning the very existence of God - it's not the same.
Read more »
Shared by Noel Giger at 12:45 PM No comments: 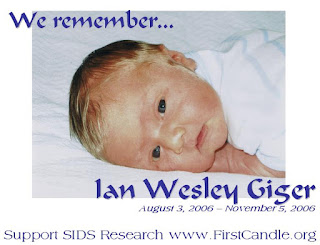 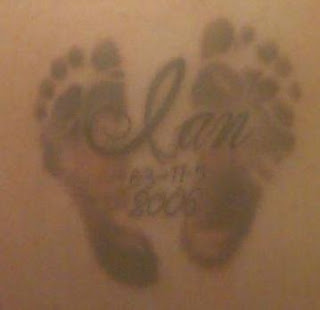 My husband's tattoo of Ian's footprints from the day he died. 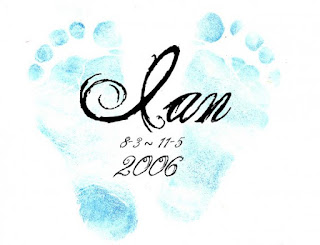 Shared by Noel Giger at 8:56 AM No comments: 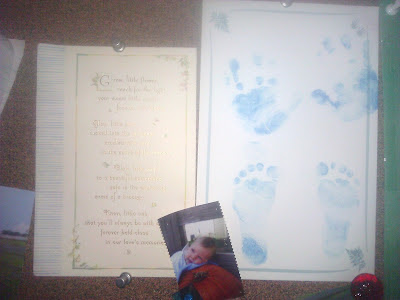 When we were at the hospital with Ian, on the evening of the 2nd day, the doctors told us that he was not going to recover. They explained the physical process to us, and the fact that if he did not pass away over night, we would have to consider removing life support.  We were told that he had no brain function, no purposeful movement (except for two toes on one foot) and that breathing was the last bodily function to stop working.

What choice is there when all three choices are horrible?  We had just been told that our son would die.

This is the setting for the most painful thing that was said to us.  The chaplain came to the room to check on us, and asked if there was anything she could do for us.  I tearfully told her that I would like to get his foot and hand prints.  I told her that if she could find an ink pad and some paper that we would appreciate it.  What was said next echoed in my mind for days: "Oh, that's in the 'death kit' I'll go ahead and bring one up."

The death kit?  It is actually a lovely handmade paper keepsake box with dried flowers and leaves.  It has a dark green satin ribbon to tie the top closed.  Inside is a place for a photo and the paper and ink pad.  I use it for my mementos of Ian, but I still hear "death kit" every time I look at it.

The death kit sat on the counter of the nurses station for several hours, until one kind nurse moved it after hearing what was said to us.  It was that same nurse who was present when he passed away - she was supposed to be off, but traded with someone so she could be with us.

After Ian passed, the room emptied and William and I were alone with our son.  The nurse came in and was so gentle as she took his prints for us - she did not treat him like a "body", she treated him as though he were asleep and she didn't want to wake him.  We cried as she handed the paper to us, instinctively realizing that it was all we had left.

This is my most treasured item of Ian.

text of the card next to the photo:

Glow, little star,
tucked into the heavens,
cradled with care
in the curve of the moon.

Blow, little leaf,
to a beautiful someplace
safe in the sheltering
arms of a breeze-

Know, little one,
that you’ll always be with us…
forever held close
in our love’s memories. 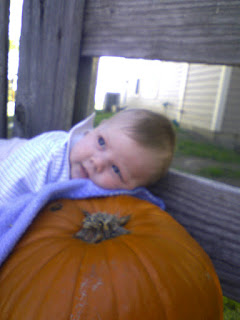 Shared by Noel Giger at 8:43 AM No comments:

Oops - they did it again! Kid's love to wear mom's make up and polish, which one did it best?

You know how it goes... There is a peaceful silence you enjoy for a bit. Then you remember, silence isn't good unless they're asleep! You creep around the corner, camera in hand and there it is... They've gotten into your stash!


To enter, upload your favorite picture (one entry per Facebook account please). The entry with the most votes will win! You are highly encouraged to beg your friends and family to vote for your picture ;)

Please also "like" the pages of your contest hostesses! Karma begs that you leave them a sweet note too!

Capture Your Grief Day 3: After Loss Self Portrait 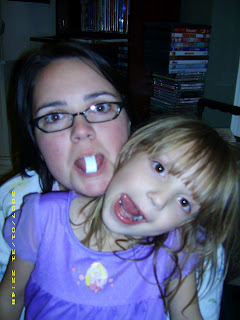 2007 - the realization that I was not in any of the photos we had of Ian, outside of the hospital (birth and death) prompted me to be less concerned with how I looked in pictures.  It was more important to capture the moments, while we had them. 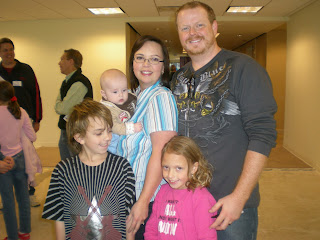 2008 - It also became very important to get "family pictures" since we didn't really get that chance with Ian.  Snapshots and professional

2009 - Family portrait.  This is the best of the session - my favorite though includes a large framed portrait of Ian

Capture Your Grief Day 2: Before Loss Self Portrait

2006, Pursuing my dream of being a full-time Wedding and Event Planner.  This is the day that I joined the Chamber of Commerce in Little Elm, TX